Well, I don’t.  I don’t imagine many people do.  I very much like being right or being wise enough to shut my mouth if I’m not sure, at least.

Back in Golden, I foretold what I thought AH would do regarding stopping his daddy-free weekend, then having to change it back as two-thirds of the kids wanted it to continue.  Good ol’ predictable AH followed exactly the path that I predicted…

Got Ms7 and M10 back right on 8 am.  They’re fighting as soon as they get through the door.

I’m not feeling a box of birds neither.  Can’t put my finger on it but just feels like Vesuvius is simmering.  I’m shattered from smashing the cupboards down on Friday.  Still haven’t got all the bits from the cupboards packed into boxes so think all this clutter may be affecting the mood too.  Last thing I need is kids who are at each other’s throats, ignoring the requests to do simple jobs.

Took them into Zealandia, a wildlife sanctuary mainly for native birds.  Really needed to get away from here and breathe some fresh air. 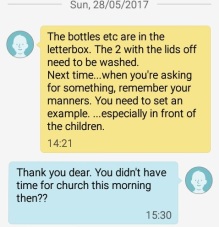 Got M10 to ring AH before we left as none of his water bottles are here.  AH claims they’re not there so I ask M10 to get him to drop off the ones he bought (my money was used after all to pay for them).  He asks M10 to put me on then just talks over me as I repeat my request.  I don’t even know what he said – and I don’t care.  Don’t see his charming text until later …

Seriously?!  This man is so filled with venom.  I really wanted to respond that I’ll speak with skank about better meeting his needs … but I force that desire down.  I think reciting bible verse might be the way forward, ie John 8:7, as nothing else seems to reduce his anger.

It’s bizarre as Ms7 puts herself to bed when we get home.  What time are they getting to sleep at AH’s?

M12’s turn to cook dinner so he does while I pack up crockery.  As we do our weekly planner, I hear how AH manipulated the whole ‘daddy-free weekend’ scenario – as expected.

Apparently, I should have never said anything to them about it.  Apparently, the boys “unscrewed” all his and my plans.  Apparently Daddy doesn’t like it being called ‘daddy-free’ or ‘kid-free’ weekend.  I suggested “Rupert” as an alternative but that didn’t fly.  I’m told “no kid” would be acceptable … but point out that I have kids so it doesn’t really work.  It really is quite the quandry!

I also ask how they were meant to find out about the plan change, if I (or AH) didn’t tell them?  They don’t know.

M10 is feeling guilty that he ‘messed up’ the change that had been agreed, but I let him know strongly that there’s nothing here that he or they have done that they should feel guilty for.  I ask if I changed their minds and all 3 said no.  M12 now says though, ‘he didn’t have time to think it through and now he has and it should stop after this one’.

Every single part of this has followed the script.  The only thing that came as a surprise was M10 saying to me “I think that you are being blamed for everything”.  Hallelujah!  I’m told that one day they will see through his BS … and that little comment made me realise that yes they will and that I need to trust them more.